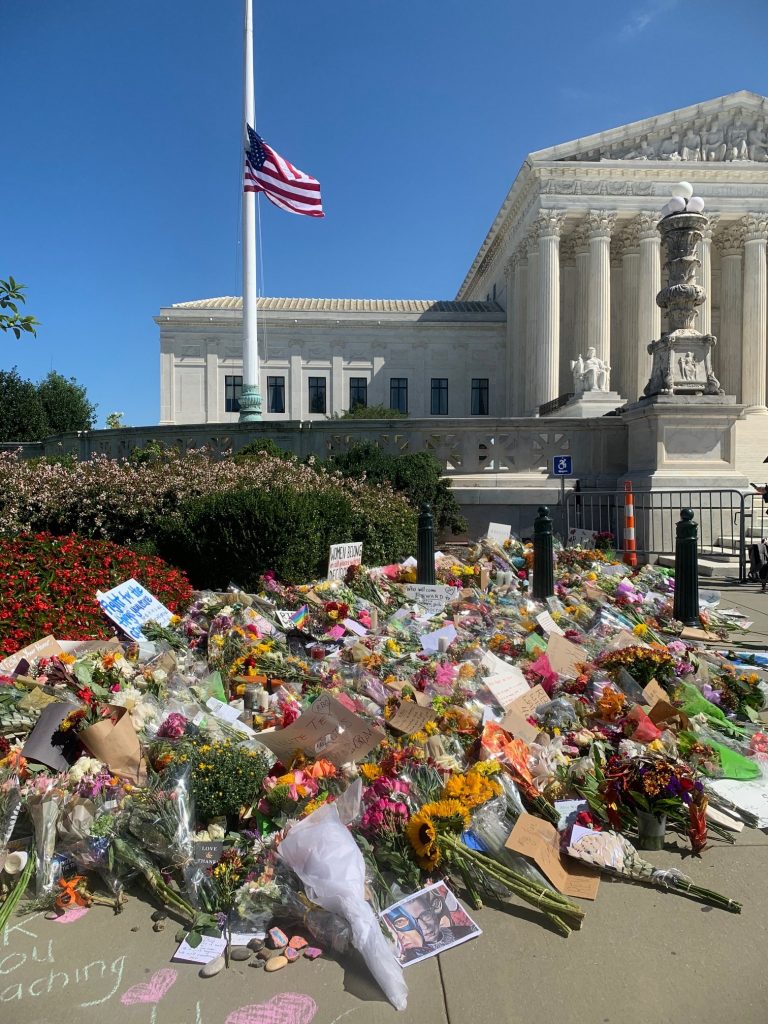 Yesterday was a very long day, involving four trains, much walking, and far too much coffee to be healthy.

After hearing the news Friday night of the death of Supreme Court Justice Ruth Bader Ginsberg, I decided to travel to Washington on Saturday to be there. I had no plans about what I might do, save to witness what people were saying and doing, and to be there in whatever shared experience might present itself.

Yesterday, in the area in front of the building that houses the United States Supreme Court, the experience was powerful and sad and weird.

I am used to being in Washington with a group, attending an event, usually involving some kind of march or parade. I am used to chanting and shouting and flags waving and glitter and beads.

Saturday, it was quiet. people walked to the Supreme Court building mostly silently, some carrying flowers, some leading/pushing/carrying children. Nobody was laughing or flirting or chanting clever things. It was unlike anything I have ever experienced before.

Terribly, terribly sad. It was simply a spontaneous public expression of grief — shared grief, experienced by a nation of people concerned for justice and for the future of our republic. We needed to be together in that moment. I didn’t see a lot of people hugging and crying on one another. People tried to maintain social distance as much as they could. Nearly all of them wore masks; and wore them correctly.

People tended to stay with the groups they came with, and would stand quietly in what looked like contemplation or prayer, and then place their flowers, or balloon, or whatever on the ever-expanding pile, and then stand back, looking at their expression of pain in the collective body that had emerged from so many other singular expressions of that same pain.